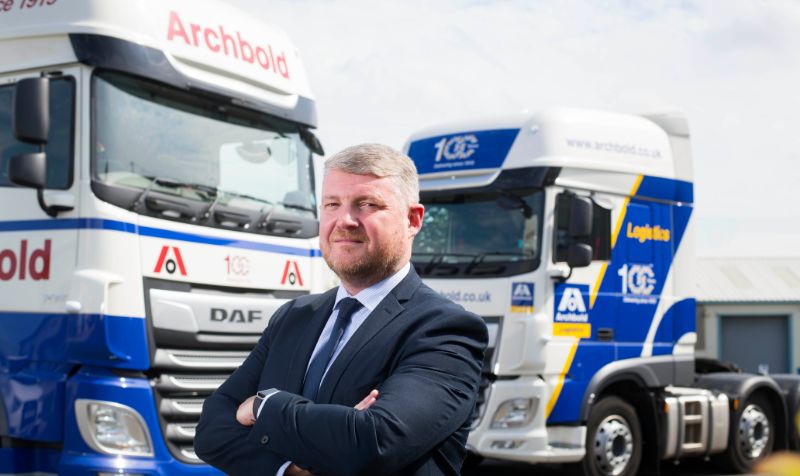 The old saying that you make your own luck could easily have been written for distribution specialist Archbold Logistics.

When the pandemic began wreaking havoc on sectors like events, hospitality and construction back in March, MD Alan Maher (pictured) remained confident that his own business could fight off the worst that Covid could throw at it.

For one thing, if there was any product consumers were crying out for back then it was paper – and more specifically toilet rolls – which just happens to be something the Manchester-based firm specialises in distributing.

In fact, as luck would have it, nearly all the sectors Archold is focused on – retail, foodstuffs and paper – quickly became ‘essential’ to the national supply chain.

Not only that, but just prior to the pandemic, the firm signed two major contracts with suppliers from these same sectors. Although temporarily delayed, they were finally activated in October – which means these are increasingly busy times for the business.

Another lucky break was that Archbold had traditionally focused around 60% of its work on the automotive sector, which has been badly hit. But the firm has since slightly changed course.

“We made the decision a couple of years ago to move into paper and packaging,” Maher confirms. “We’d been heavily in automotive. If we’d had that mix coming into the lockdown things could have been a lot different. We were very fortunate.”

Taking me through the challenging last few months, he says the company was exceptionally busy at the back end of March and into April: “We do a lot in the food sector and in paper and tissue where there was a massive demand for toilet rolls,” he laughs.

“Once the volume settled down we were a bit overstocked and there was a bit of a lull through May into June so we took advantage of the furlough scheme. We took payment holidays on equipment just to manage the cash and furloughed 30 to 40 staff.

“But volumes started to come back after lockdown and from mid-July they’ve picked up across a lot of sectors.”

A member of Palletforce since 2007, Archobld celebrated its 100th anniversary last year. The company has evolved impressively over the years and can now boast a global division.

“They do a lot of automotive on the global side,” Maher admits, “but when everyone was at home doing baking during lockdown a lot of the product came in from Greece and they were heavily involved in that – bringing in cake mix. It fell in when automotive was quiet.

“The pallet network is a good barometer of what’s happening out there,” he continues, “and Palletforce volumes increased massively over that July and August period. We’re doing more than ever though our allocation. We do probably half the Manchester postcodes.

“Added to that we’ve had a couple of contract wins so we’ve had an exceptionally busy October and everything’s picking up. It’s been as busy as normal out there during the second lockdown. People are just carrying on as normal. There’s been no reduction in traffic throughout November.”

The company is targeting £17m to 18m turnover by the end of the year and looking at £25m next year as it refines the new contracts.

“The two key things to expand next year are our contract logistics and our global offering,” Maher says. “We’re already looking at a couple of targets. We’ve just got to do the leg work now to get there.”

So what’s been the biggest challenge through all this?

“It used to be getting drivers,” he says, “but we’ve got plenty now, and agency drivers. We’ve managed to source them where we can because we do a lot of retail support separate to our normal trading. We support the likes of Royal Mail with their seasonal peaks and that volume will be exceptionally big this year.

“Our biggest challenge is bedding in the two new contracts. We’d never have planned to bring two on board in the same month! But there are people in other sectors waking up to bad news on a daily basis. We’ve done the ground work and we’re ready to go next year.”

That said, Maher agrees with recent claims that manufacturers and dealers are suffering from a “trailer drought” ahead of the Black Friday and Christmas peaks, with prices for second hand trailers reaching unprecedented levels.

“Our restriction this year has been down to the lack of availability of equipment and trailers,” he says. “We’ve got good relationships with regular people but I could do with another 20 trailers to support the Christmas peak. It makes it a lot harder so we’re trying to subcontract more. We’re not letting anyone down but it’s been our toughest year to get additional equipment.

“Anything beyond the new contracts has been snapped up by the likes of Amazon and Royal Mail. There’s a massive demand in peak retail.”

Maher also reveals that the company may not see the traditional January lull next year: “We see business really picking up in the second half of next year, but the good thing for us is a lot of our customers have got a bit of pent-up demand. So they’re expecting a busy January which is the complete opposite to what we normally get. A lot of our customer base are predicting they’ll be busy in Q1, certainly January and February.

“For us, it’s where there’s a shortage of paper and they can’t get it in fast enough for the packaging. The ones they can’t supply in December they’ll have to push over into January, which is great news for us.”

Ultimately, Maher paints an optimistic picture for the business and for the wider haulage and logistics sector.

“The volumes are there, everybody’s busy,” he concludes. “All this has sort of confirmed we’ve got the right strategy. And it’s helped us streamline the business. We’ve sat back and looked at the departmental set up and the cross functional working. It’s given us the blueprint to carry on this way.

“Fingers crossed we’re in a good place and we’ll continue that on into 2021.”

The old saying that you make your own luck could easily have been written for distribution specialist Archbold Logistics. When the pandemic began wreaking havoc on sectors like events, hospitality and construction back in March, MD Alan Maher (pictured) remained confident that his own business could fight off the worst that Covid could throw at it. For one thing, if there was any product consumers were crying out for back then it was paper – and more specifically toilet rolls […]
The post “Everything’s picking up” – contract wins drive growth at Archbold appeared first on Motor Transport.Read More