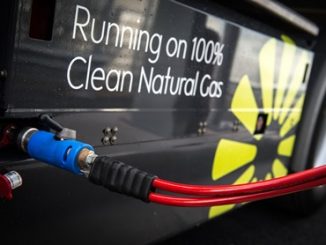 In my archive, I have a Commercial Motor road test cutting, unusually with an accompanying video, dated 15 December 1996. It is of a back-to-back road test of two identically laden ERF EC12s belonging to BOC Distribution, carried out by Toby Clark, then vehicles editor and me, then engineering editor.

One of the ERFs was powered by a 12-litre Perkins Eagle Tx engine rated at 340hp and the other by another Eagle Tx, but converted to spark ignition to run on compressed natural gas (CNG) and rated at 300hp. We were accompanied on the comprehensive test by Brian McMurray, then the engineer in charge of the Perkins natural gas engine conversion programme and probably one of the most experienced gas engine engineers in the UK at the time.

The objective was to assess the viability of natural gas as a road fuel. We expected the diesel to deliver better fuel consumption, partly because the extra horsepower suited the challenging test route that we had prepared. For the record, the diesel returned 8.27mpg, while the CNG engine delivered 7.83mpg. That was a lot closer than the hotel bar estimates we had come up with the night before the tests.

A great deal has changed since then – technology for one thing. These days most natural gas powered trucks run on liquefied natural gas (LNG) and the engines are purpose-built production line engines built alongside their diesel counterparts, not converted by specialist teams. Both spark ignition and diesel-cycle compression/ignition engines are in production too. At the time, I commented that the gas-powered ERF offered notably less engine braking, something that would be overcome by the current diesel cycle engines.

Scale has also changed. There were a handful of gas-powered trucks on UK roads at the time and current sales, while still comparatively small compared with diesel, number in the hundreds.

Other things are relatively unchanged though. Back then our Euro I or II compliant CNG engine offered much cleaner emissions than the diesel with far lower emissions of oxides of nitrogen (NOx), particulate matter (PM) and carbon monoxide (CO). Those advantages have been eroded by advancing technology and the report prepared by Cenex last year, ‘Dedicated to Gas’, on the Innovate UK trial of 20 gas vehicles showed that the principal advantage natural gas power offers is in reducing greenhouse gas emissions. The report states that, ‘GHG savings are significant even with small blends of biomethane.’

Otherwise, NOx levels were similar to Euro-6 diesels and PM similar for the LNG models in the trial, although the CNG models demonstrated slightly higher PM emissions than Euro-6 diesel.

The fuelling infrastructure for natural gas is still relatively small but larger than it was and growing. Since government incentives have encouraged the production of biomethane, operators can run vehicles on gas produced from environmentally-friendly sources, mostly from anaerobic digestion of sewage, reducing the consumption of fossil fuels.

How big is the market for natural gas powered trucks? The only manufacturer that was prepared to talk numbers to us was Volvo which has sold 395 of its LNG compression/ignition-powered trucks so far this year. This compares with sales of 142 for the equivalent period last year. That represents a 278% increase on 2019 – respectable when the Covid-19 pandemic is factored in too.

“This technology offers up to 20% reduction in CO2 and in the recent ‘Dedicated to Gas – An Innovate UK Research Project to Assess the Viability of Gas Vehicles’ report published by Cenex, the Volvo truck in the trial delivered a 13% reduction in the total greenhouse gas emissions”, says John Comer, head of product management, Volvo Trucks UK and Ireland. “This can be taken close to 100% well-to-wheel with the use of liquid biogas and renewable HVO in lieu of diesel.”

Volvo’s diesel cycle 420 and 460hp engines offered in the FM and FH use up to 5% diesel in the combustion process – a quantity of diesel fuel is used to initiate combustion, with LNG completing the process.

Mercedes-Benz currently produces the Econic NGT and Actros NGT models, although the Actros NGT has not been offered for sale in the UK. Both models are to be discontinued. A spokesman told us, “We believe CNG fuel is a stepping stone on the way to CO2 neutrality, and we’re advancing production of our electric trucks.

“Daimler Trucks is investing in new vehicles for CO2-free transport, and this requires huge investments that focus primarily on electromobility.”

Production of both gas models will probably be discontinued by the end of 2021. Mercedes-Benz has said it is committed to supporting customers who are operating the Econic NGT. Customers include Liverpool Council which purchased 20 Econic NGT models in 2019.

Renault Trucks has adopted a similar position. The company offers a Range D CNG model, but also places the emphasis on electric vehicles for urban and last mile deliveries. The Daimler Trucks joint venture with Volvo Trucks will give Renault Trucks access to fuel cell technology by the second half of the 2020s, when hydrogen will be the gas focus for the company.

Iveco is the only other manufacturer currently supplying natural gas powered vehicles and we did not receive a reply to our requests for information.

Gas sales for commercial vehicles are another good indicator of the state of the natural gas truck market. Biomethane supplier Gasrec is also seeing large increases at the moment: “Two or three years ago, there weren’t that many gas vehicles on the road, because we were moving from Euro-5 to Euro-6”, says James Westcott, chief operating officer. “As the manufacturers have launched new product, the market has grown quite quickly and our sales volumes now are double what they were in January and they were double what they were the January before.”

This seems to support the sales trend that Volvo Trucks has seen. The government has made a commitment to keep fuel duty lower for natural gas vehicles than diesel-powered vehicles until 2032, with a consultation in 2024. As Comer at Volvo comments, “This will support the transition of the current fleet into the used market.”

Interestingly, There are differing opinions about which truck segment is better suited to gas powered vehicles. Connolly at Scania told us: “At the present time, return-to-base operations are the most popular (due to pioneering operators investing in on-site refuelling stations) although improvements in range also see the product suiting many regional applications.”

For Comer at Volvo Trucks, it’s a different picture: “Our LNG models are best suited to long and regional haul, with annual mileages above 120,000km, which is sufficient to deliver a return on investment in 2.5 to 3 years.

“The majority of our LNG customers are in the retail sector, or are contract hauliers supplying retail.”

Despite growth, infrastructure is still an issue with a comparatively small number of fuelling sites across the UK. There are both CNG and LNG stations around the country with multiple sites around Bristol, Glasgow, Liverpool, London, Northampton, Nottingham and Swindon according to the Gas Vehicle Hub (https://gasvehiclehub.org/).

In addition there are six other sites dotted across England, but notably no sites in Wales, Devon, or Cornwall. It’s an issue that Westcott at Gasrec acknowledges: “We have eight facilities at the moment, two of which are public. The vast majority of investment decisions we’re making at the moment are for public facilities, but we’ll probably have two more on the ground in the next quarter and then next year we’d hope to have the same number again. So we’d like to be up to around 12 or 13 by the end of next year and with the balance more on a 50/50 basis, open to the public.”

That would bring a useful increase to the current number of sites, but would still leave plenty of room for expansion, which is likely to be key for operators thinking of taking on natural gas powered trucks.

A further complication are ferry and tunnel company regulations, a potential issue for those on international haulage. Both Brittany Ferries and Irish Ferries state that LNG (not CNG) is permitted for models produced by recognised manufacturers with standard specification. The gas supply must be switched off for the crossing. Eurotunnel does not permit gas powered vehicles of any kind.

Stena Line did not respond to our request for information.

In my archive, I have a Commercial Motor road test cutting, unusually with an accompanying video, dated 15 December 1996. It is of a back-to-back road test of two identically laden ERF EC12s belonging to BOC Distribution, carried out by Toby Clark, then vehicles editor and me, then engineering editor. One of the ERFs was powered by a 12-litre Perkins Eagle Tx engine rated at 340hp and the other by another Eagle Tx, but converted to spark ignition to run […]
The post Natural gas – the future of long distance haulage? appeared first on Motor Transport.Read More